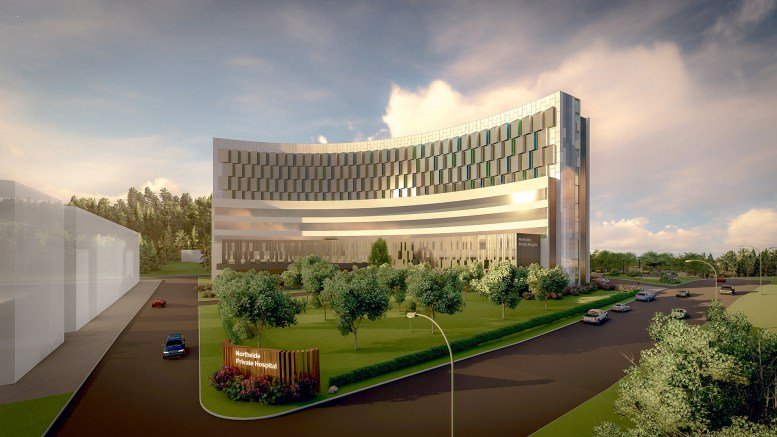 A major new private hospital and health precinct is earmarked for Racecourse Rd, Gosford, and should be up and running within a few short years.

It is the brainchild of Northside Group, comprising developers Commercial HQ and the Gibbens Group. “We had a vision for a medical precinct close to the existing public hospital,” Commercial HQ Managing Director, Tim Gunasinghe, said. “There is a growing demand for medical facilities on the Coast, with continued population growth. “We bought the land late last year and hope to be in a position to start construction within 12 months.”

Gibbens Group CEO, Matthew Gibbens, said that as a State Significant Site, the development, on the 3.1HA former Ausgrid site, would not need to go through Central Coast Council for approval.
It will include: 14 state of the art operating theatres; 224 inpatient beds; an intensive care unit; a radiology department; food and retail tenancies; a pathology centre; a pharmacy; physiotherapy and rehabilitation clinics; a geriatric unit; and, a mental health unit.

Gunasinghe said it was possible a nursing home would also be included, as well as an on-site carpark. The project team will include Development Manager, Colliers International, Project Manager, Donald Cant Watts Corke, and architects, Health Project International.
Marcelo Ramirez, of Colliers International, said it would employ around 2,200 people during the construction phase. “Once completed, it is anticipated that upwards of 460 permanent jobs will be generated, bringing an economic benefit of $54m per annum to the region,” Ramirez said.
The hospital itself is expected to be completed by 2022, with the rest of the precinct to be added behind it, to the west of Gosford Hospital.
AA Crown is also looking to partner with Australian universities to create training facilities for local students within the medical profession, increasing health research and development opportunities.

Refer to contract for sale.
The material contained herein has been produced prior to detailed design and construction, it is indicative only and does not constitute a representation by the Vendor, Agent, or Vendor’s consultant in respect to the size, form, dimensions, specidifications or layout of the apartment at all. The final product may change from that illustrated herein. Furniture is not included. All furniture shown is for illustration purposes only. Changes may be made to the detailed layouts during the development in accordance with the provisions of the contract of sale or the building and or planning requirements or for compliance with relevant standards or codes. Any interested parties should make their own enquiries as to the accuracy of the information.

Central Real and their third-party partners use cookies on their websites. A cookie is a piece of data that a website sends to your browser and which is then stored on your computer or other internet-enabled devices. As you browse through the website, advertising cookies will be placed on your device by Central Real and third-parties so that we can understand what you are interested in. Central Real run targeted advertising, enabling us to present you with advertising on other sites based on your previous interaction with the website. You may be able to use your browser settings to manage cookies. These settings may include deleting all or some cookies, not accepting any cookies, or being notified when cookies are being used.